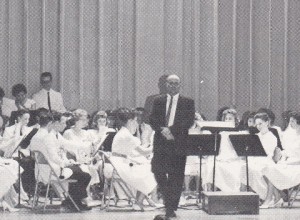 The Tricky Sixty band held its 1962 Annual Spring Concert on April 20 of that year. The program for the concert provided a perspective of the band at that point in its history:

“Why is the A.H.S. Band known as the Tricky Sixty?

“For a number of years the actual membership of the band was approximately sixty – thus explaining the first portion of the question. The expression ‘Tricky’ was applied because of the versatility demonstrated during halftime shows. For the most part, original arrangements are played, and performances are often based on events occurring only hours before show time.

“Although band membership has long since exceeded sixty, the ‘Tricky Sixty’ name and tradition have endured. (Note: In earlier years, and with smaller numbers, the band had been known as the ‘Tricky Fifty.’ When the band’s numbers were even smaller, Mr. Flanary had referred to it, kiddingly and unofficially, as ‘Frantic Flanary and his Frustrated Forty.’) 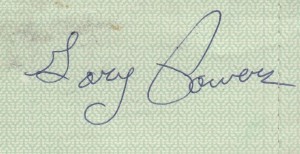 “The band’s flexibility and quick response were recently demonstrated on a nation-wide scale. Notified that their presence was requested for the ‘Welcome Home’ celebration for U-2 pilot Francis Powers, the band had a very short time to prepare for this assignment.

“On the day of the event, band members reported to school in their uniforms. In approximately ten minutes, rehearsal of a special arrangement of ‘When Johnny Comes Marching Home’ was completed. 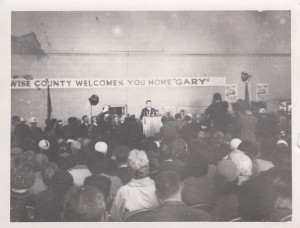 “The band reported to the National Guard Armory in Big Stone Gap and took a position alongside the outstanding Powell Valley High School Band. Upon the arrival of Powers, the ‘Tricky Sixty’ broke into the stirring strains of their special arrangement.

“The celebration was broadcast ‘live’ over nationwide radio, and was covered by representatives of the three major networks. Thus the versatility of the ‘Tricky Sixty’ was again demonstrated – this time to the entire nation.”

The program also paid tribute to the Band Boosters organization:

“The 1961-62 school year has been one of notable achievement for the Appalachia Band Boosters. Cooperating with interested merchants and patrons of the town, money was collected and new band uniforms were acquired within a period of five months.

“Under the leadership of Mrs. Edd Gillenwater, president of the Band Boosters, the fund solicitation was carried out smoothly and efficiently. Mr. C.P. Dorton, the principal of Appalachia High School, was instrumental in the fund drive as well.

“The success of this undertaking attests to the civic-mindedness and dedication of this group of individuals.”