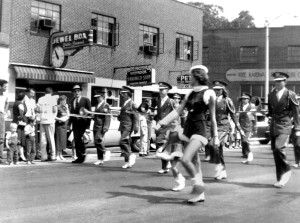 It started out on the skinny side of the Tricky Fifty. Appalachia really wanted a strong high school band in the 1950’s, but past attempts to form one had been difficult. There were problems with parents being able to afford instruments for their children, and also it had been difficult to find a band director who was willing to take on the task. But when Mr. J.D. Flanary arrived on the scene, all that was about to change. He quickly convinced a number of students that we could overcome the problems of the past, and that we could excel if we applied ourselves. And he did it, in my opinion, with a very basic approach-imagination and innovation, combined with a deep love for music.

It was not that Flanary was not an accomplished musician in his own right. He played a mean trombone, managed to pick out chords on the piano, and used our band practice time in school to entice everyone to practice more at home, much to the dismay of our parents, no doubt. When the windows of the homes were open, you could hear clarinets, trumpets, trombones, flutes, and even drums echoing between the homes. He even encouraged some of us to learn multiple instruments.

But we had a lot of competition in the area from already established bands. The Big Stone Gap band could play “Wait til the sun shines Nellie” as a march with so much precision and volume it made us envious. And the Clintwood band could march with such straight lines we wondered how in the world we could ever compete with them in competition. But Flanary had other ideas. He introduced an unusual start routine for the marching band-forward, back, forward, back, then one, two, step, kick- Play and March! It became our trademark. Soon the crowds were paying attention to us, and started to realize that we could also play pretty well too.

Every year the bands in the various divisions, based on school size, would compete at Bristol, Virginia-Tennessee. The goal was to win a top rating in your division. When we first tried to compete, we did not place very highly against the very good bands in our area. But Flanary decided he would change all that. We did a routine where the band played “I’ve got you under my skin”. The band formation was that of a chigger or tick. At one point with only drums playing, everyone went into a scratching routine. I was told later that the judges totally cracked up laughing, and forgot to pay attention to our marching and playing details. Anyway, we won one of the top trophies in our division for the first time.

I think J.D. Flanary was a natural match as a director of the Appalachia High School band at that time. He did not like the fact that we used On Wisconsin as fight song when he arrived on the scene, so he wrote a new one which the school used, to my knowledge, for as long as it remained in existence. And our concert bands began to achieve more status, with a number of students earning chairs in the All State Band over the years.

From the blog of author and former Tricky Sixty member Robert Moore.

2 thoughts on “The Tricky Sixty Band”