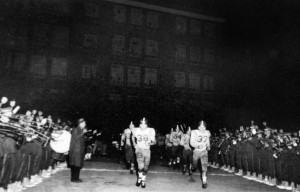 Over the years, several old Appalachia High School alums have asked me about the history of the AHS “Fight Song,” and the “Alma Mater.” I was just four years old when my mother and father wrote the former tune, but I knew all the details from subsequent conversations with them as I got older. I was a member of the band when the Alma Mater was first played, so I recall those details well. For my fellow AHS buddies, I hope this brings back some nice memories of our school:

When Joe Flanary started the band program at Appalachia High School in the fall of 1952, he inherited a small core of students with varying degrees of musical skills. Some had studied under Mrs. Virginia McChesney, and a few had taken private lessons or learned how to play instruments on their own. Early on, Flanary asked the students who could play if they had a school fight song. They said they did, so he asked them to play it. The tune was “Washington and Lee Swing” (“Oh when those AHS boys fall in line, we’re gonna win that game another time, and for the AHS I yell, I yell, and for the AHS I yell, I yell, I yell…”).

It was typical for high schools to use a few familiar college fight songs, but to change the lyrics to match the high school’s mascot, colors, or name. The most popular of these included “Hail to the Victors” (University of Michigan), “Across the Field” (Ohio State), “Notre Dame Victory March” (Notre Dame), “On Wisconsin” (University of Wisconsin), and the before stated “Washington and Lee Swing,” from the Virginia college of that name. A check on You Tube will probably turn up all of these familiar melodies.
Flanary became well known for both composing from scratch, and writing his own arrangements of tunes for the high school band. He thought Appalachia should have an original fight song, so he composed the tune (and wrote a full score for band) that was first played that fall of ’52 at a home football game until the school’s closing in 2011. Flanary’s wife, Virginia, wrote the lyrics:

Appalachia High School, so proud we are of you;
We will sing the praises, of the school that’s strong and true.
May we keep our spirits high, though we may win or lose,
So fight, fight, fight with all your might,
and bring another victory t-h–r–o-u-g–h.
(Fight, team, fight!)

As originally written, the last three beats of the song were to have the vocal split between half of the voices singing an extended three-beat “through,” and other half singing “Fight, team, fight!” However, the cheerleaders of that time never could get it right, so instead they added “Team, Fight!” at the very end. It wasn’t exactly consistent with the song’s meter and phrasing. However, that’s how subsequent generations of AHS students sang it, so that’s the way it remained.

When the new AHS opened in 1960, shortly thereafter two members of faculty teamed up to write a school alma mater. Again, Flanary composed an original piece of music for band, but this time English teacher Bill Locke penned the lyrics:

In the great Blue Ridge stands a lonesome pine,
And its branches spread over that school of mine.
And the memories wrought by that glorious sight,
Fill my heart with glee, through the weary night.
Appalachia High School, we love you,
With a heart so brave and true.
Time may turn your walls to dust,
But cherish still our dreams we must.

So, both the fight song and alma mater at AHS were completely original and unique to the school, both musically and in lyric. Appalachia’s long-time rival, Powell Valley High School in Big Stone Gap used “On Wisconsin” for its fight song. While the lyrics for its alma mater (written by Jack Gibbs) were original, the music was the same as the University of Tennessee’s alma mater. Even Kingsport’s Dobyns Bennett High School uses a re-hashed college fight song as its own (although nearby Sullivan South’s is an original).

Finally, when Appalachia High School finally closed at the end of the 2011 school year, the school’s last band director, Kimberly Sturgill, had written a full band score for both tunes. In the intervening years since Flanary left in 1971 and then, the original music manuscript with all the various parts was lost, so she wrote out all the parts from scratch. When Union High School was created from the consolidation of Appalachia and Powell Valley, Sturgill was selected as the new school’s band director. In the tradition of Joe Flanary, she wrote another original fight song for Union-and a very good one at that. Good job, Kim. My father would be exceedingly proud of your fine work and dedication as a music educator.